In 1980, a seminal year for the club in many ways, the first Casterton-Coleraine hunt club show was held. The following report was written for the Hunt Club by Carol and Ed Baudinette, who, for many years, worked very hard to establish the Hound and Terrier show. This has now morphed into the Hamilton Show, but back to the start.
Several Casterton-Coleraine hunt club members had been to the Yarra Glen/Lilydale Hunt Club Point to Point and Hunter Show which included Jack Russell terriers in their hound show programme. As there were some local breeders of the JRT it seemed a good idea to do something similar for the Casterton-Coleraine Hunter Show.

With the help of Shirley Foster, her father Bert Donehue and Frank Houliham, all of Wando Vale, a small programme was introduced to the Hunter Show in 1980. It was a successful day with some JRT's and owners travelling from further afield for the day. Unfortunately no records remain of the results of the day.

Pets and working Jack Russells were not always registered with the JRTCofA and only registered dogs were eligible for the first few years. However, as the Hunt club had no real affiliation with the JRTCofA we were able to innovate when it came to classes for our show.

Hounds were not always part of the early programmes, though paraded occasionally during the Hunter Show at the Coleraine Showgrounds. Hounds were added later as were unregistered JRT's and running dogs.

Running dogs were part of many hunting teams so they were a natural addition and in 1993 they had their own classes. The class for the Hunting Trio which had to consist of at least one JRT, was first introduced by the Hunt Club but has since become an entegral part of many similar events. With the help of Shirley and her father terrier racing and High Jump also became part of the day. We had by this time become bigger than the Hunter Show, so in 1990, the Casterton-Coleraine Hunt Clubs Jack Russell and Foxhound Show moved to the Hamilton Showgrounds where the big Sheep Pavilion gave everyone protection from the vagaries of the Hamilton weather. The Hunt Club Newsletter of June 1990 reported that 'Carol Baudinette's new venture to the Hamilton Showgrounds proved a winner. No-one got wet despite a showery day. The Pavilion was used for all events except The Terrier High Jump. The winner of this event set a new Australian recvord of 1.733 metres - a superb effort by Millbrook Sam and his owner Liz Downey, who was only two weeks away from having her 2nd child.'

'Our first successful high jumper was David Dennis's Flowerhill Daisy in 1991, Liz Downey's Millbrook Sam also starred for a couple of years. Then along came Sutherland's Daphne (a daughter of Daisy) who went on to become High Jump champion five times from 1994-1998 and her best jump was 1.85 metres. As well as being a great jumper, Daphne was an integral part of the Hunt Club being on many hunts and often to the fore when a fox went to ground.

The event developed in other ways as well. The JRTCofA members would meet at the Foster's home on the Saturday before the show and this get together developed into a day of hunting in 1994 which was followed by a BBQ and social evening. People came from Sydney, Orange, Bathurst and Gunnedah in NSW and from Ballarat, Geeling, Melbourne, Wodonga, Mount Gambier and several more local districts, the first of the two day Shows.

The day before the 1995 show, Ed Baudinette led a convoy of terriers and their owners to Carapoole where they spent the day walking McPherson's Creek where the terriers searched out foxes for the guns. They had a successful day giving the prize of the foxtail for the lure racing the next day.
The presidents report for the Hunt Club noted that 'Carol and Ed Baudinette's efforts had turned into a two day show and was a good earner for the club'. In fact, the 1995 show made a huge profit of $1,326 for the Hunt Club proving it's worth as a fund raiser.

But in 2002, as the Hunt Club membership dropped, mainly due to new Public Liability policies, the show was handed over to the JRTCofA. This Show was always different because of the variety, Lure racing, Artificial Dens, fancy dress, and finally the now established Novelty ring which includes all manner of classes for adults and children and dogs of all shapes and sizes.

We stand to be corrected, but do not think that Daphne's record High Jump of 1.85 metres has been beater. Ron and Val's Aspen Heathcliffes Choice (Cliffy) to his friends has cleared 1.76 metres. 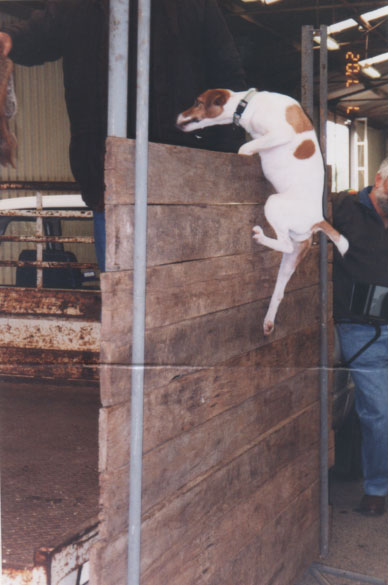